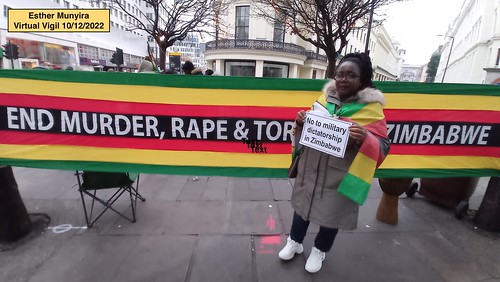 The Zimbabwean journalist Hopewell Chin’ono has received an international award for his fight against corruption. Chin’ono said it was an important milestone not only for himself but for Zimbabwe, which was struggling to move ahead because of unprecedented looting of public funds and abuse of the judiciary (see: https://www.newzimbabwe.com/chinono-gets-qatar-anti-corruption-award-dedicates-it-to-a-zimbabwe-struggling-due-to-unprecedented-looting-of-public-funds/).

If the proposed law against Zimbabweans criticising the government is passed, no doubt Chin’ono would face severe consequences for this remark. For its part, the opposition People’s United Party has called for next year’s elections to be delayed. Party leader Hebert Chamuka said the situation was likely to get worse ‘if Zanu PF steals another election’. Instead, he said, the government should engage the opposition so that parties could work together to resuscitate the economy.

Elections, he said, were ‘a mere ritual for Zanu PF to remain in power’. The Zimbabwe Electoral Commission employed relatives of ruling party leaders and would not allow the party to lose (see: https://www.newzimbabwe.com/opposition-calls-for-postponement-of-2023-presidential-elections-says-voting-does-not-bring-a-change-in-zimbabwe/).

Newsday says Auditor-General Mildred Chiri has exposed ‘massive rot and corruption’ by the Ministry of Public Service, Labour and Social Welfare. Her report said: ‘The ministry was allocated a total of $7 382 629 000 in the 2021 financial year and its total expenditure was $5 867 713 446.  This means at the end of the year the ministry had $1 514 915 554 that was unspent, which is disturbing considering how many families, pensioners and persons living with disabilities had to go without food at the height of the COVID-19 pandemic, and how many schoolchildren had to leave school through non-payment of fees’.

The Auditor-General also found that 120 motorcycles donated by the UN Children’s Emergency Fund in 2015 were lying idle because the social workers who were supposed to use them did not have licences. It was also noted that payments were made to beneficiaries with fictitious identity numbers and suspicious names and incorrect contact addresses (see: https://www.newsday.co.zw/local-news/article/200004807/audit-exposes-massive-rot-in-social-welfare-ministry).

In a lengthy report, the Zimbabwe Civil Society Anti-Corruption Coalition and other concerned civil society organisations expressed concern at acts of electoral corruption widespread in the country. It spoke of rampant examples of vote buying and violence, the abuse of government programmes to appear as if they belonged to political parties and the alleged manipulation of the voters’ roll, among other issues (https://www.thezimbabwean.co/2022/12/eliminate-all-forms-of-electoral-corruption-ahead-of-the-forthcoming-2023-zimbabwean-harmonized-elections/).

The Vigil hopes that the delegation from the International Monetary Fund now in Zimbabwe will examine these reports (see: https://www.newsday.co.zw/theindependent/local-news/article/200004759/imf-team-flies-into-the-eye-of-zim-economic-storm).