BULAWAYO – Starlink, a satellite internet constellation operated by Elon Musk’s SpaceX, has announced it will rollout services to 37 African countries this year.

Angola, Kenya, Mozambique and Zambia are expected to be the first to get Starlink by June, while Zimbabwe and over two dozen other countries should be connected by the end of the year, the company projects.

Starlink’s satellite service could link hard-to-reach rural communities to the internet, but the cost of the service means governments and donor organisations may have to subsidise the deployment.

In the United States, Starlink offers unlimited data and speeds up to 200 Mbps for US$110 per month on top of an initial payment of US$599 for the mountable satellite dish and router which subscribers need to install at home.

Starlink has not announced any discounts for Africa where a fifth of the population – about 200 million people – are not even covered by a 3G signal.

In April last year, the United Nations set a target of achieving universal internet access by 2030, but the chronic deficit of telecoms infrastructure on the continent raises doubts whether the target can be met without drastic action.

Large internet connectivity providers on the continent are finding that investing in fibre-optic cables or mobile phone towers to serve the so-called “last mile” communities in remote areas is often not economically viable, often preferring to invest in the densely populated urban areas where returns are guaranteed.

In areas where the cost and difficulty of constructing traditional infrastructure is too great, satellite is likely the only viable option. 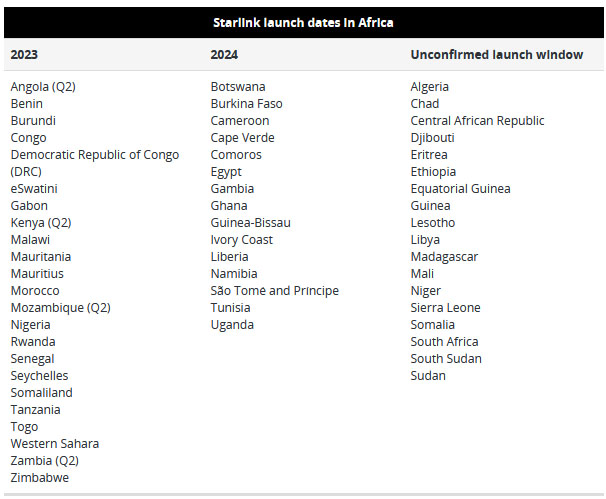 Satellite internet is not, itself, a particularly new technology. What is novel about Starlink and several of its competitors is that they rely on satellites that are in low earth orbit (LEO).

Being closer to the earth, LEO satellites are able to receive and transmit information with much lower “latency” than traditional communication satellites, meaning that users will not suffer as much from a “satellite delay”.

Because LEO satellites are closer to the earth, each satellite can send a signal to a relatively small area. The result is that a very large number of satellites are needed to provide continuous coverage across the globe.

The rollout of the satellite service requires regulatory approvals by each country.