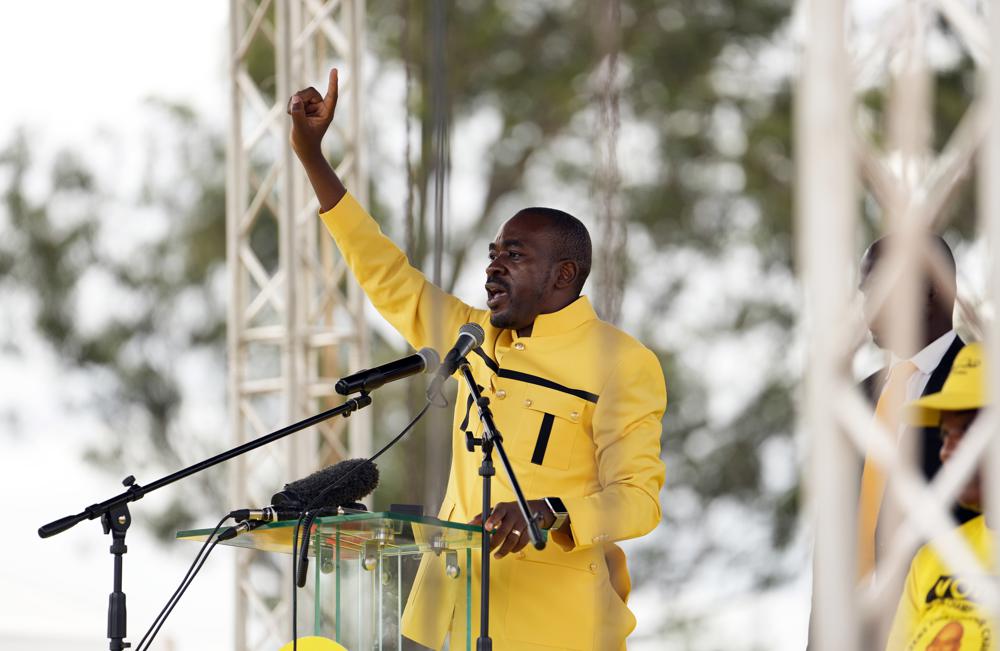 Zimbabwe’s main opposition leader, Nelson Chamisa addresses a rally in Harare, Sunday, Feb. 20, 2022. Chamisa drew thousands of people at his first political rally since forming a new party weeks ago, as the country gears for elections that had been postponed due to COVID-19.(AP Photo/Tsvangirayi Mukwazhi)

Citizens Coalition for Change (CCC) leader Nelson Chamisa says the violent attack on his supporters by ZANU PF activists during a campaign rally in Kwekwe on Sunday is provocative and intended to plunge the country into bloodshed and instability.

Speaking during a press conference in Harare on Monday, Chamisa warned that suppressing young people through violence will be counterproductive as it would sow the seeds of instability.

Chamisa said the ZANU PF-led Government is worse than the Rhodesian regime because, unlike the latter, which was a racist white minority cabal, the former oppresses its own people. He said:

No amount of threat nor intimidation will save our youths. Is this not the same suppression under Smith that gave birth to the liberation idea?

All the war veterans of our liberation struggle and the entire crop of leaders in govt today were the same age (18 to 30) as the youths that they brutalized in Kwekwe last Sunday and are brutalizing across the country.

Their only crime is seeking the right to self-determination through peaceful campaigning and peaceful elections.

This is the same brutality Zimbabwe experienced from under Ian Smith Regime, except, in this case, ZANU PF is by far worse than the Rhodesian regime in that it brutalizes its own people, 42 years after it failed to deliver independence, freedom and prosperity.

The War of Liberation was an answer to an unrelenting and repressive regime that considered the people of Zimbabwe as being less human, and mere pests to be exterminated.

Chamisa also castigated ruling party officials for making “reckless and thuggish utterances” that fan “the fires of hate and intolerance”.

On Saturday, Vice President Constantino Chiwenga said it’s a matter of time before ZANU PF crushes the Citizens Coalition for Change (CCC) “like lice” to prevent the opposition party from winning elections and attaining control of the State.

Chiwenga made the remarks while addressing ZANU PF supporters at a campaign rally in Kwekwe at Mbizo Stadium, a day before ZANU PF activists murdered a CCC supporter at Mbizo 4 Shopping Centre.