Source: A Zimbabwe-born academic extraordinary thirst for knowledge – The Standard 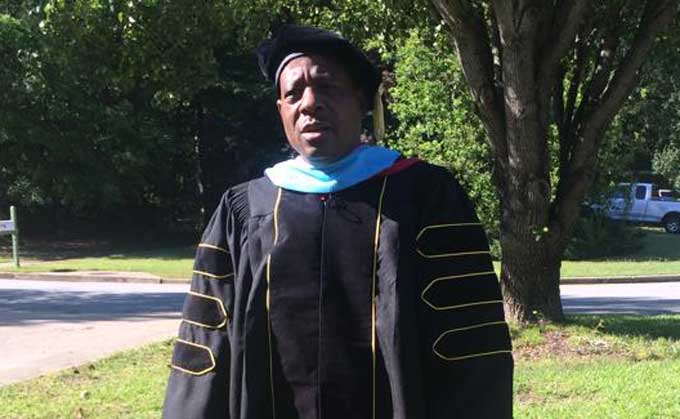 With an impressive profile of world recognised academic qualifications obtained at home and abroad, United States-based Zimbabwean academic and technician, Busani Nkosiyabo Siphambili says acquiring education has become like an addiction for him.

Born in Esigodini in Matabeleland South to a Filabusi headmaster, the 57-year-old Siphambili,  who is based in Georgia, speaks passionately about his hungry pursuit for more knowledge.

It took some persuasion to get the academic speak about his achievements as he insisted that he doesn’t like |being in the spotlight’.

Affectionately called Doc B within his circle of acquaintances, Siphambili began elementary education in different schools in Matabeleland South and would grow up to become a citizen with professional skills in car mechanics, education, computers and auditing.

Siphambili attended the University of Zimbabwe where he obtained a UCE diploma in 1990.

Among some of his multiple tertiary qualifications is a Bachelor of Science degree in Interrelated Special Education from North Georgia College and State University in 1998, a Master of Sciences in Education obtained fromTroy university in 2009, a Specialist degree in Leadership, a PHD in Educational Leadership, and several Associate degrees, diplomas and certificates in computer systems, education and automotives.

Asked about the driving force behind his quest for knowledge, the former Stewart County School System deputy principal/facilities director said, “I am an inquisitive person, l like to know more. So, everything that has challenges, l feel l need to take a crack at it.

“I am a science person. All my majors are sciences, something I enjoy and at the end of the day, it became something like an imprint in my mind grain.”

Siphambili said reading books was now an addiction he will never fight off.

“There will never be a point in which I will say this is enough I am done with school, because we learn every day,” he said.

“I think now it’s a lifestyle; it is like a hobby.

“Trust me I have had well-paying jobs. I enjoy what I do. I would not take any job to trade with what I am doing now.

“I am trying to adjust not to be reading books all the time.”

Asked about any prospects of returning to Zimbabwe , Siphambili said although he loved his homeland he did there would be an employer who would fit his profile.

His addiction for education has inspired his three daughters “to focus on books not boys”.

One of his daughters is now pursuing studies in the areas of kinesiology/physical therapy.

But while the lecture room has turned into more of a natural habitat for the academic, Siphambili has found delight in casual farming where he produces maize and vegetables.

“I do farming, I have chickens, eggs. I like organic food. I bought land in the States to do whatever I wanted to,” he said.

“I buy and restore Classic cars.

“I have stopped working on computers because I got tired of it.”