HARARE – Following Zimbabwe’s win against Pakistan in their T20 World Cup cricket match on October 27, a bizarre feud over a fake Mr Bean has emerged between the leaders of the two countries.

Zimbabwe’s President Emmerson Mnangagwa took to Twitter to praise his nation’s win after the match in Perth, but added an odd message at the end of his tweet.

“Next time, send the real Mr Bean,” he wrote.

The comment referred to a man known as “Pak Bean”, who impersonates the popular Rowan Atkinson character in Pakistan.

In response, Pakistan’s Prime Minister Shehbaz Sharif wrote: “We may not have the real Mr Bean, but we have real cricketing spirit and we Pakistanis have a funny habit of bouncing back.

Pakistan lost by one run at the match after their batter Shaheen Afridi was run out off the final ball, with two still needed for the win. 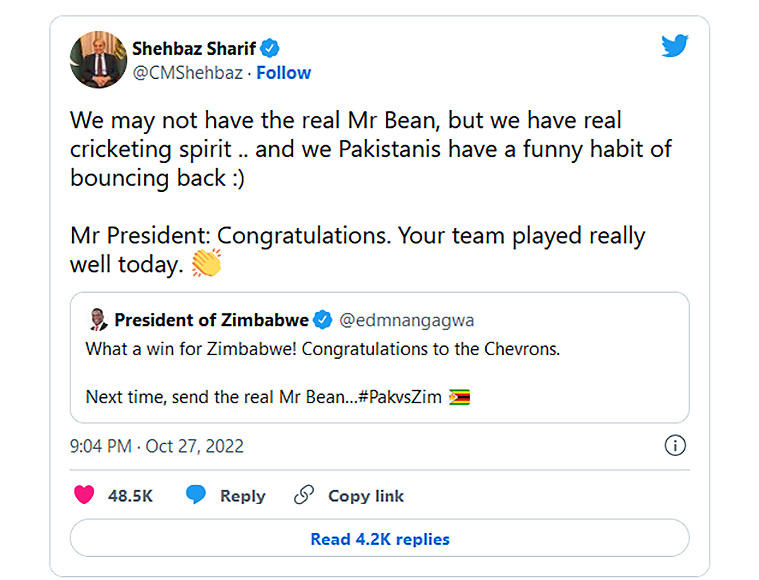 The fake Mr Bean row actually seems to have started a few days before the match took place, after a Zimbabwean Twitter user, who goes by the name Ngugi Chasura on the social media site, sent a tweet on October 25.

In a reply to photos of Pakistan’s players training for the game, he wrote: “As Zimbabweans we won’t forgive you… you once gave us that Fraud Pak Bean instead of Mr Bean Rowan… we will settle the matter tomorrow just pray the rains will save you.”

The tweet gained more than 38,000 likes but left many people confused about how the “Pak Bean” saga had begun.

When a couple of Twitter users asked what had happened, Mr Chasura explained: “They gave us Pak Bean instead of Mr Bean on one of our local events called agriculture show.”

He also shared a picture of the Mr Bean impersonator, which local media has reported as a man named Muhammad Arif, who is famously known for his resemblance to the character.

News outlets in Pakistan have reported Mr Arif was invited to an event in Zimbabwe in 2016 where he attended a comedy night and was given a “hero’s welcome” with many locals trying to take a picture with him.

Zimbabwean news outlet Apex News Zimbabwe shared photos and videos of Mr Arif waving to fans while appearing out of the sunroof of a car.

“A fake Mr Bean was once paid to come and perform in Zimbabwe in 2016,” it wrote.

Pakistan’s shocking cricket defeat now means only the Netherlands sit below the team in the Super 12 Group Two table after all six sides’ first two matches, while Zimbabwe are third. – Sky News