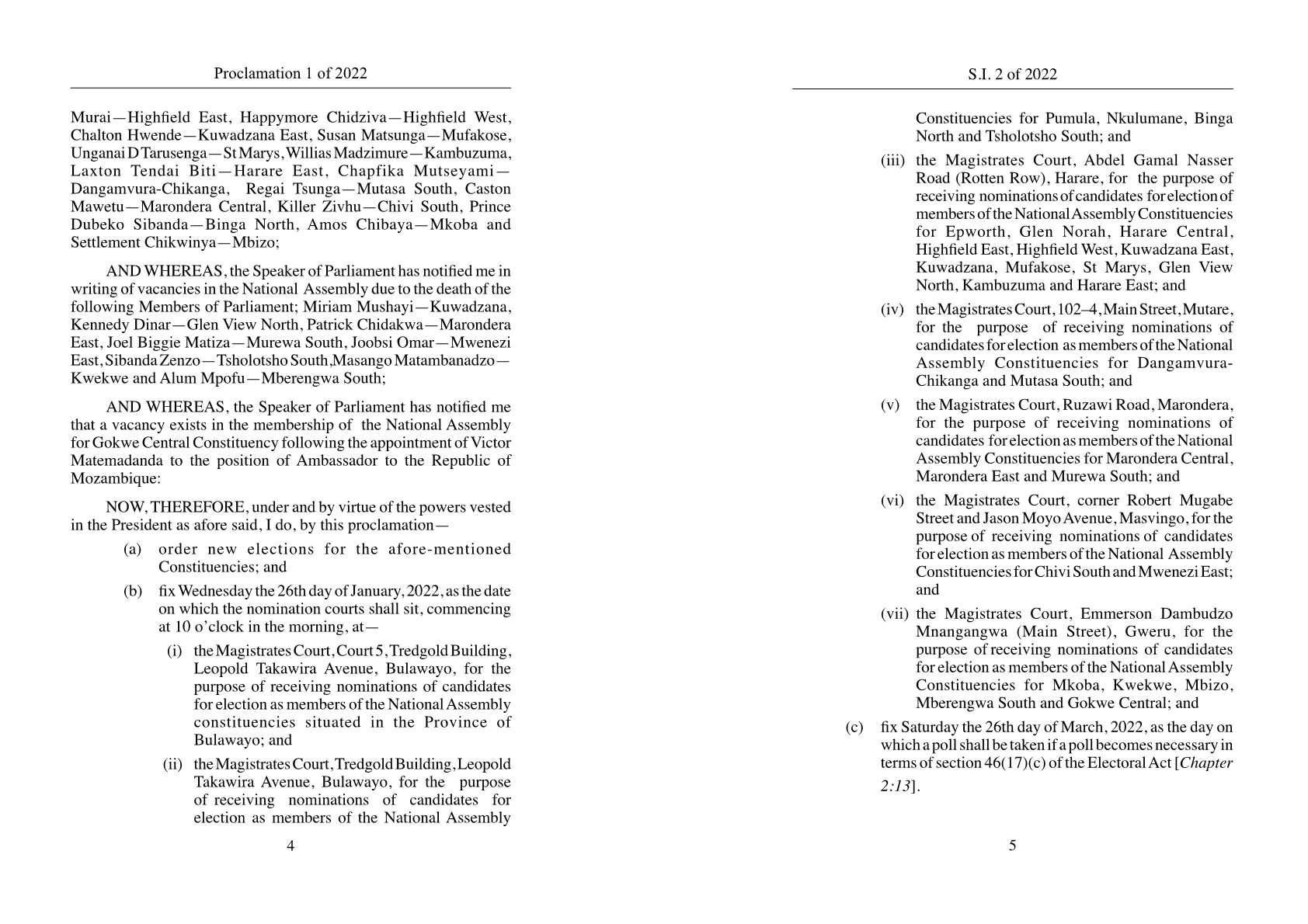 PRESIDENT Emmerson Mnangagwa has proclaimed March 26 as the date for by-elections through Statutory Instrument 2 of 2022, setting the stage for parties to contest for about 133 vacancies in Parliament and local authorities.

The nomination court will sit on January 26 to register candidates, according to the proclamation dated December 24, 2021, but only published yesterday.

The nomination court will sit on January 26 to register candidates, according to the proclamation dated December 24, 2021, but only published yesterday.

The proclamation immediately jolted MDC-T leader Douglas Mwonzora into panic mode, who visited Mnangagwa at State House yesterday, reportedly to discuss the issue of elections in a closed-door meeting.

Mwonzora’s party caused the 133 vacancies after it recalled MDC Alliance representatives in Parliament and local authorities.

Some of the vacancies were caused by deaths.

Four other MPs from the opposition MDC Alliance led by Nelson Chamisa were recalled by the People’s Democratic Party led by Lucia Matibenga. 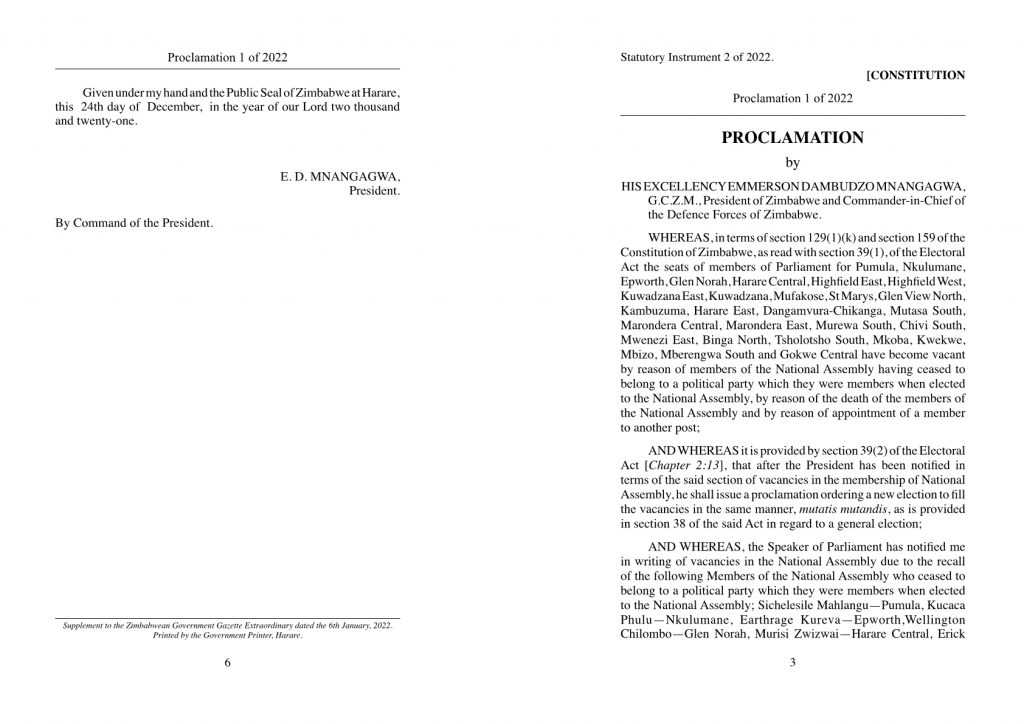 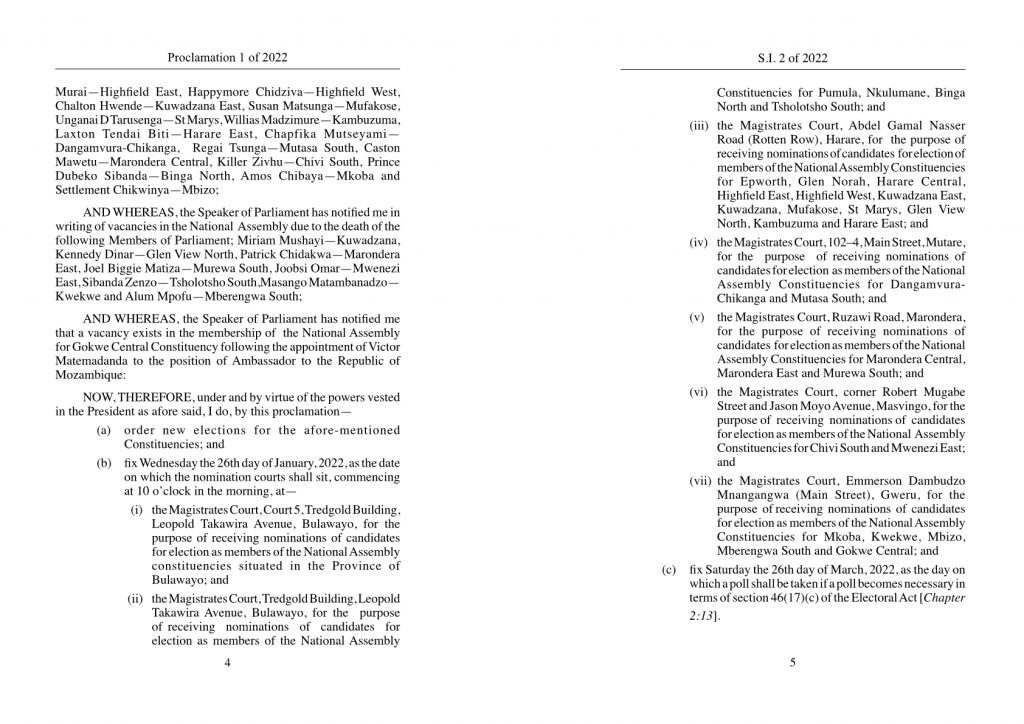 The recalls resulted in around 28 vacant parliamentary and 105 council seats across the country, according to the Zimbabwe Electoral Commission (Zec).

The election proclamation came at a time when Zec was under pressure to revamp its secretariat over inconsistencies in the voters’ roll, as well as its failure to make it readily available.

Election Resource Centre (ERC) legal and advocacy officer Takunda Tsunga said: “The ERC maintains that while the suspension of the by-elections was illegal from the onset, the by-elections themselves are a step in the right direction in terms of participatory democracy. However, the ERC is concerned at the lack of implementation of electoral reforms that are ingredients for free, fair and credible elections. ERC will continue to engage with all relevant electoral stakeholders, including Zec, Parliament and the Ministry of Justice to ensure that all electoral reforms are implemented.”

MDC Alliance spokesperson Fadzayi Mahere said the proclamation of election date should be accompanied by a clear reform roadmap that paves way for an undisputed election.

“The bad governance and legitimacy crisis that continues to plague the Mnangagwa regime is a direct result of the disputed election of 2018,” she said.

Mwonzora confirmed to NewsDay that he held an urgent meeting with Mnangagwa and Zanu PF secretary for finance Patrick Chinamasa at State House in Harare, but denied reports that the meeting discussed the pending by-elections.

“We met President Emmerson Mnangagwa as part of our continued efforts at forging national dialogue,” he said.

But well-placed sources within the MDC-T told NewsDay that the main agenda of Mwonzora’s meeting with Mnangagwa was to discuss the looming polls.

On social media, Mwonzora’s critics claimed that he had met Mnangagwa to plot how he could stop members aligned to the Chamisa-led MDC Alliance from contesting in the by-elections.

“We are ready for any election,” Mwonzora said disputing the claims.

“Mr Chamisa’s camp wants to use such baseless claims on by-elections as a scapegoat for their fear of our expected resounding victory in the upcoming by-elections.”

Political analyst Fidelis Duri said Mwonzora had “every reason” to resent by-elections because his chances of winning were slim.

“He knows very well that he is not the legitimate leader of the party. He knows that he does not have followership. He knows that by-elections will mark the end of his political career. He has been avoiding by-elections for a very long time with the aid of Mnangagwa,” Duri said.