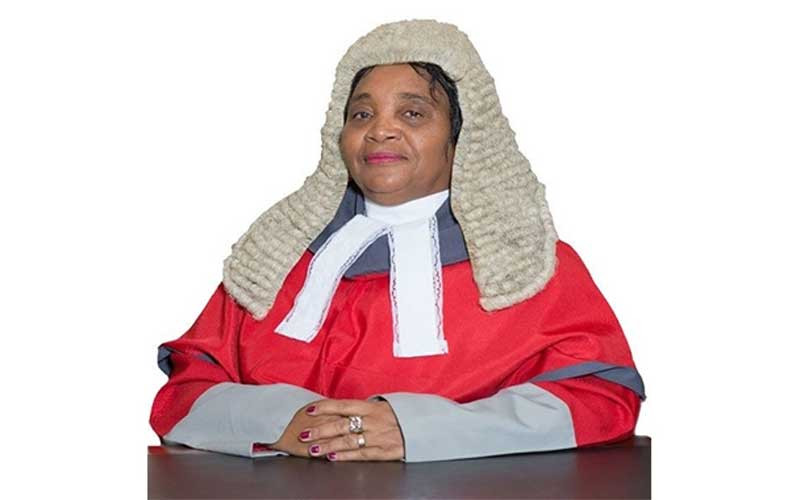 WOMEN’s Comfort Corner founder Rita Mbatha has filed a letter of complaint against Deputy Chief Justice Elizabeth Gwaunza for alleged “unlawful alteration of the transcript of proceedings” and wants the Judicial Service Commission (JSC) to investigate the top judge.

In a letter addressed to JSC secretary Walter Chikwanha dated November 10, 2022, Mbatha accused Gwaunza of abuse of power as a judge which she said had an impact on the rule of law and asked JSC to deal with the matter.

“The unlawful corrections noted at the Supreme Court in the file under file No SC 443/21 are evidence of blatant illegality. It is material that I complained about the bias against me and she is aggressively retaliating against me,” Mbatha alleges.

She previously wrote to Justice minister Ziyambi Ziyambi on the issue but received no response.

In another letter dated November 7, 2022, Mbatha said there was a deliberate attempt to prejudice her in a case before the courts.

“The contents of the transcription are grossly inaccurate. The intentions are to ploy and manoeuvre the process and rule of law to avoid accountability and undermine the administration of justice and the constitutional decree of a fair trial,” Mbatha said.

“It remains the primary duty of the Judiciary to ensure that it facilitates access to information that would enhance the enjoyment of fundamental rights and to make this information accessible to the litigants. The transcript indicates that only Gwaunza communicated with parties. Requisite relevant information supporting me was deliberately left out.”

Mbatha alleged that the information that she needed in her heads of argument to be filed with the Constitutional Court was deliberately left out.

“The judgment under SC443/22 is deliberately tainted with gross, deliberate inaccuracies to irremediably prejudice me,” she said.

Gwaunza’s actions, she said, were unlawful and unconstitutional.

“The complaint is anchored on section 6 of the Judicial Code of ethics, Statutory Instrument (SI) 107 of 2012. Judicial misconduct contemplates and is not limited to the breach of a specific provision of the Code of Ethics but covers wilful or grossly negligent conduct that is “incompatible with or unbecoming the holding of judicial office, including any conduct that is prejudicial to the independence, impartiality, dignity, accessibility, efficiency or effectiveness of the court.”

Mbatha wants JSC to denounce Gwaunza for her handling of the case.

“As the complainant, I am seeking the intervention of the JSC to deprecate the Honourable judge’s conduct as such conduct hardly conduces to the protection of the dignity, independence and effectiveness of the Judiciary and the judicial system,” Mbatha said.

“Kindly note that as the complainant, I am not requesting legal guidance but lodging a complaint about what I consider to be misconduct on the part of the Deputy Chief Justice. I need protection, the naked harassment is egregious. I am kindly requesting that this complaint be circulated to all commissioners. The harassment is debilitating my life.”

Contacted for comment, JSC spokesperson Daniel Nemukuyu said he would check on the alleged matter and revert.

He had not done so by the time of going for print.

Recently Mbatha also wrote to Chikwanha alleging threats and harassment by Justice Catherine Bachi-Mzawazi who she said wanted to force her to consent to the setting aside of a judgment under Case Number HC49862014.

Under the case, Mbatha was awarded US$180 000 by the High Court after she lost her job for reporting her former boss for sexual harassment following a nearly 20-year legal battle.

Mbatha had reported the former Confederation of Zimbabwe Industries (CZI) chief executive officer Farai Bwatikona Zizhou for sexual harassment when she worked as his assistant between 2002 and 2003. The former CZI boss responded by sacking her.

Gwaunza has another complaint pending against her from businessman Tendai Mashamhanda over misconduct allegations.