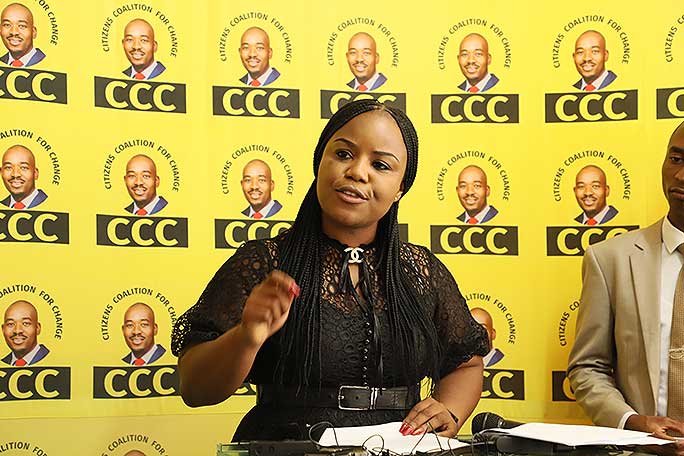 THE opposition Citizens Coalition for Change (CCC) party says it will attend today’s Independence Day celebrations, a departure from the past where its leader Nelson Chamisa shunned national events.

In early 2018, Chamisa announced that his then MDC Alliance party would abandon the boycott national events, but reversed the decision following bitter and disputed general elections that year.

Chamisa still insists that President Emmerson Mnangagwa is an “illegitimate” leader and refuses to acknowledge his victory.

However, CCC interim national spokesperson Fadzayi Mahere said the opposition party would have representatives at the Independence Day commemorations to be held across the country, with the main event scheduled for Bulawayo’s Barbourfields Stadium.

“As a citizens’ movement, we acknowledge the effort and sacrifices of our liberation heroes, war veterans, war collaborators and citizens, living and departed, who contributed to the attainment of the liberation of our nation from colonial rule,” Mahere said in a statement.

“Whereas there are political differences, there is no debate about honour, respect and acknowledgement of all national institutions, organs, events and programmes. Our loyalty to Zimbabwe and our loyalty to the country is the absolute marker of the preservation of our history, legacy and identity as a people.”

“Independence Day belongs to us all as Zimbabwean citizens. For this reason, we encourage all citizens to participate in such important national processes and events without tainting them with partisan conduct. Accordingly, we assert that we are going to be represented at all key national events.”

Chamisa was coy yesterday when asked if he would share the stage with Mnangagwa today, but Local Government minister July Moyo said the opposition leader was welcome.

“The President has also invited all political leaders in this country to the VIP stands that have been prepared for these celebrations,” Moyo said.

This year’s celebrations are held under the theme: Zim@42 —  Leaving no one and no place behind.

Outspoken political activist Lisa Ncube said she was disappointed that CCC had decided to attend independence celebrations while their members were being persecuted.

“You can’t just attend independence celebrations to make people happy. The question is, are we independent? If not, then what are we celebrating? We have CCC members fighting court cases, Mbonisi Ncube was murdered, rallies banned and elections rigged. What is there to celebrate?” Ncube said.

But Blessing Vava said CCC’s attendance  was a progressive move.

“It’s a very progressive and commendable move; such important events are for all Zimbabweans irrespective of political affiliation. Zimbabwe has a history, it came through selfless sacrifices by our brave heroes and heroines who participated in the struggle for independence,” Vava said.

Another political analyst Gibson Nyikadzino said CCC was rebranding into a nationalist outfit.

“The CCC which as a rebranded faction of the MDC-T internal fights is now awakening to the reality that divisiveness, polarisation and partisanship are neither correct nor good for their movement or national political ecosystem,” Nyikadzino said.