Zimbabwean women embrace jobs in the mining sector, thanks to incentives provided by the government and mining companies 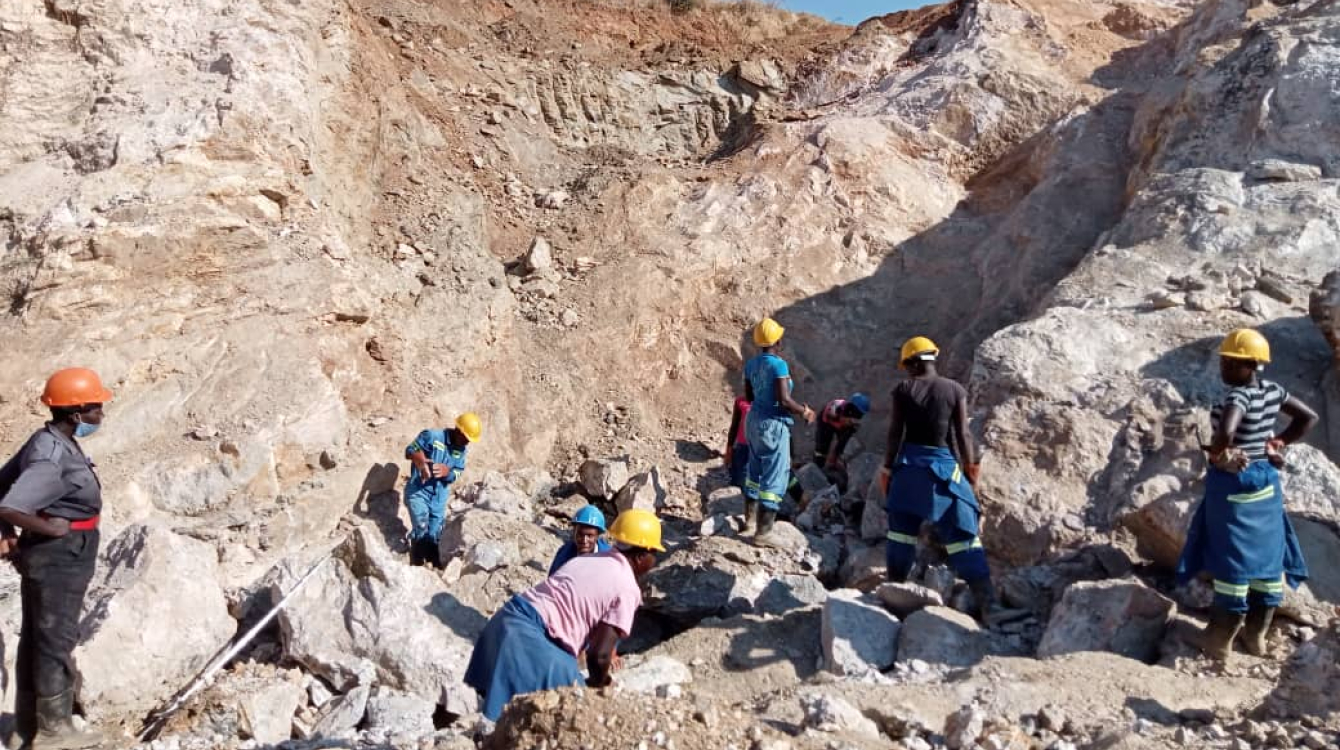 A group of women miners at work in Zimbabwe.
Sporting a designer work suit, helmet and 14-pound hammer resting on her shoulder, 46-year-old Petiner Makupa seems to be pondering her next move as she sets off for work one morning.

As the country grapples with economic sanctions, many Zimbabwean women are joining the artisanal mining industry. Women make up to 10 per cent of the 535,000 artisanal and small-scale miners in the country.

Africa Renewal recently spoke with Ms. Makupa about how the government and other players are spearheading women’s empowerment in the mining sector at a small or large scale. One such player is Zimbaqua Mining Company. 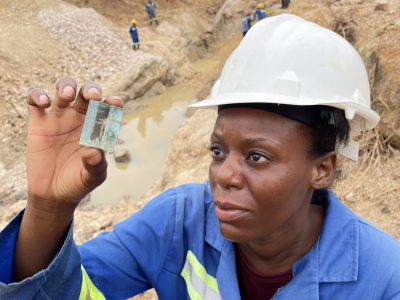 Ms. Makupa, who joined Zimbaqua five years ago, says she couldn’t see herself working in the male-dominated profession, but she saw no other options. “At first, I didn’t believe I could do the job. But when my husband developed a mental problem, I had no choice but to take up the challenge so I could take care of our five children and keep them in school.

“Since then,” she says, “two of my children have finished the [General Certificate of Education] Ordinary Level. I’m enjoying my work in the mine. We usually start each day at an assembly point where safety rules and regulations are read to us. My usual duties involve hammering and chiseling or shoveling.”

She urges other women to consider the mining profession, saying there are opportunities such as machinery maintenance and repairs and operations.

She often mentions the potential of career advancement: “The company provides us with training courses. I’ve learned how to maintain or repair various types of machinery. Having that ability is empowering.” 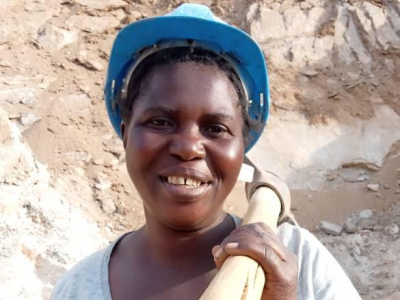 Sylvia Mugova is 41 years old. Born in Masvingo in south-eastern Zimbabwe and mother of five, she agrees with Ms. Makupa that women should take up the challenge of working in the mining sector, whether in a large or small-scale company.

“I’m married, but my husband has been going through a bad patch, so I have been looking after the family,” Ms. Mugova says. “Women used to think that mining is only for men, but we have found that there is nothing men can do that we cannot. So I challenge other women to come on board.”

She adds, “As women, we need training in the workplace. Training offered in the mining sector has enabled many women to succeed professionally.”

Women used to think that mining is only for men, but we have found that there is nothing men can do that we cannot.

Senzeni Tshuma, a 46-year-old mother of two, also knows that women are capable and diligent workers and can compete equally with their male counterparts in the mining sector.

“Before joining Zimbaqua, I was a gold panner,” says Ms. Tshuma. “Since coming here, I’ve learned a lot and advanced through the ranks. I’m a pit manager today. I address our workers in the morning at the assembly point, assign them duties and supervise them.

“Thanks to my job, I’m able to look after my two children, as well as my unemployed husband. Along the way, I have acquired leadership skills that can prove handy even if I leave the organization. I’m grateful for the tutorials the company offers. They equip women with the skills and knowledge to work on the same level as our male counterparts,” she explains.

Rumbidzai Gwinji, manager of Zimbaqua Mining Company, talks about the strategy of hiring only women at her organization.

“At most mining companies in Zimbabwe, women rarely have a chance to fill vacancies,” she says. “This is especially true in rural areas where women are expected to stay home and look after their children.

“We’re different,” Ms. Gwinji explains. “We have created an environment that accommodates women’s needs and entices them to work by introducing different categories of benefits and awards. Our experience has demonstrated that women can work equally as hard and perform as well as their male counterparts.”

She challenges the government to come up with policies that push for equal employment opportunities for women in the mining sector. “Government can start by encouraging female students to study male-dominated fields, such as mining,” she explains. “It also should extend to women training programmes that male artisanal miners receive.”

“This shows we are moving in the right direction as a country,” he comments. “To maintain our momentum, I urge the government to support this effort with rigorous policies and incentives.”

Reflecting on how it all started, Zimbaqua Mine Director Iver Rosenkrantz says the idea of a mining project that employs women occurred to him after a series of visits to Karoi, a well-known farming region.

“At first, it was difficult convincing tobacco farmers to take part in mining activities,” he explains. “Although only a few small-scale artisanal mining projects were operating, we saw an opportunity, as well as a need. Women had to support their children in terms of food, shelter and education,” he says. “That’s when we decided to hire only females. 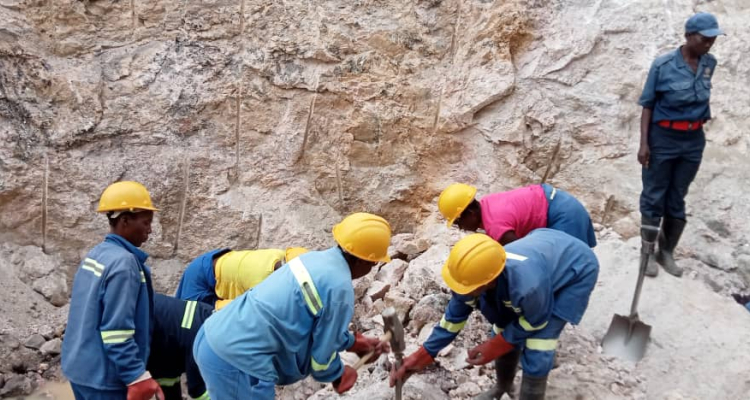 Everyone was convinced we would fail. On the contrary, we’ve done well, and we’ve changed the narrative.

“Obtaining community leadership support proved challenging,” according to Mr. Rosenkrantz. “In rural areas, women are expected to stay home and look after their children. Everyone was convinced we would fail. On the contrary, we’ve done well, and we’ve changed the narrative.”

Today, Zimbaqua employs 35 women who perform every function—from explosive handling to truck and excavator driving, and more. Most of them have become managers with good incomes.

“It’s a success story on a business and human level,” says Mr. Rosenkrantz. “Many of them came from poor harsh backgrounds. Now, they have stable incomes, are capable and empowered business persons, and are super motivated.”

Pfungwa Kunaka, Permanent Secretary for Ministry of Mines and Mining Development, acknowledges Zimbaqua and other players in the mining sector for availing equal employment opportunities to women.

“Government is fully behind Zimbaqua and other firms in the mining sector that have taken it upon themselves to provide meaningful employment opportunities to women,” he says.

Mr. Kunaka adds, “We have made great efforts to incentivize women in mining by offering them loans through the Reserve Bank of Zimbabwe, Mining Industry Loan Fund and Zimbabwe Women’s Microfinance Bank. VAT deferment is granted to mining companies on capital imported for 120 Days, subject to the conditions set by the Commissioner-General,” he says.

The government is also developing a gender-inclusive mineral-development policy, which will cater to special interest groups that include women.