Kin say she was unaware of drugs, add that a foreign national in her building had offered her a job to bring a parcel from the African country 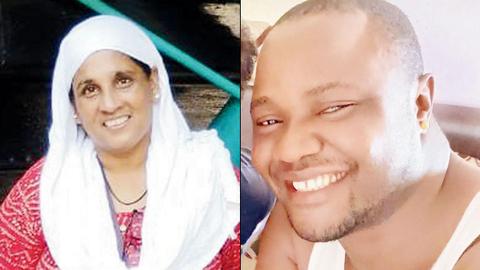 Zeenat Shaikh (right) Zadi Elie, who asked her to take parcel to India

A 45-year-old Nalasopara resident was arrested by the Zimbabwe police for illegal possession of 9.2 kgs of drugs in October last year and has been inside a prison since. Her family members claimed that the arrested woman was offered a job to bring the bag from the African country to Mumbai and that she was unaware of the contents of the bag. They further said that it was a foreign national who lived in a rented flat in the same building in Nalasopara who offered her the job and also paid for her visa and flight tickets.

The arrested woman, Zeenat Khatun Rafiq Shaikh, lived with two daughters, aged 19 and 17, and a 16-year-old son at Silver Plaza building in Hanuman Nagar, Nalasopara West. Shaikh used to earn some money from looking after the maintenance of the same building. As the sole earning member of the family, she was in need of money after her elder daughter*s wedding was fixed in October last year.

As per her family members, it was at that time that a foreign national who used to live in a rented flat in the building offered her a job of going to Zimbabwe and collecting a parcel for him. Shaikh agreed to the job and left for the African country on September 20 last year and was set to return in October.

However, she was arrested by Zimbabwe drugs and narcotics officials from Victoria Falls Airport after the officials recovered 9.2 kgs of heroin. According to Zimbabwean authorities, detectives from the CID Drugs and Narcotics, Victoria Falls received information that the suspect was in possession of heroin, which she intended to smuggle into India, following which they searched her belongings, found the drugs and arrested her.

Shaikh*s son-in-law Faizan Shaikh, 23, told mid-day, “On October 1, we got information about her arrest. We told the police officer everything and asked for help to get her back to India. We also talked to a lawyer in Zimbabwe and paid him Rs 3.5 lakh, but there has not been any positive development so far.” Faizan, who got married to Shaikh*s elder daughter on October 24, added, “We urge the government to help us bring her back.”

He further added that the foreign national who sent Shaikh to Zimbabwe escaped a day before they learnt of the arrest. He said that the man stayed in the building for six months and that he left all his belongings except for laptop and phone while escaping.

Pintu Gupta, one of the developers of Silver Plaza building, said that the foreign national*s name is Zadi Elie and he used to live in a flat with a Nigerian. Both of them have been absconding since they learnt of Shaikh*s arrest. “I have known Zeenat for around 12 years. She is an innocent woman. I had employed her to look after the building*s maintenance. She told me that Elie had promised to give her R50,000 to bring a parcel containing clothes from Zimbabwe to India.”

9.2 kg
Weight of the heroin found from her bag