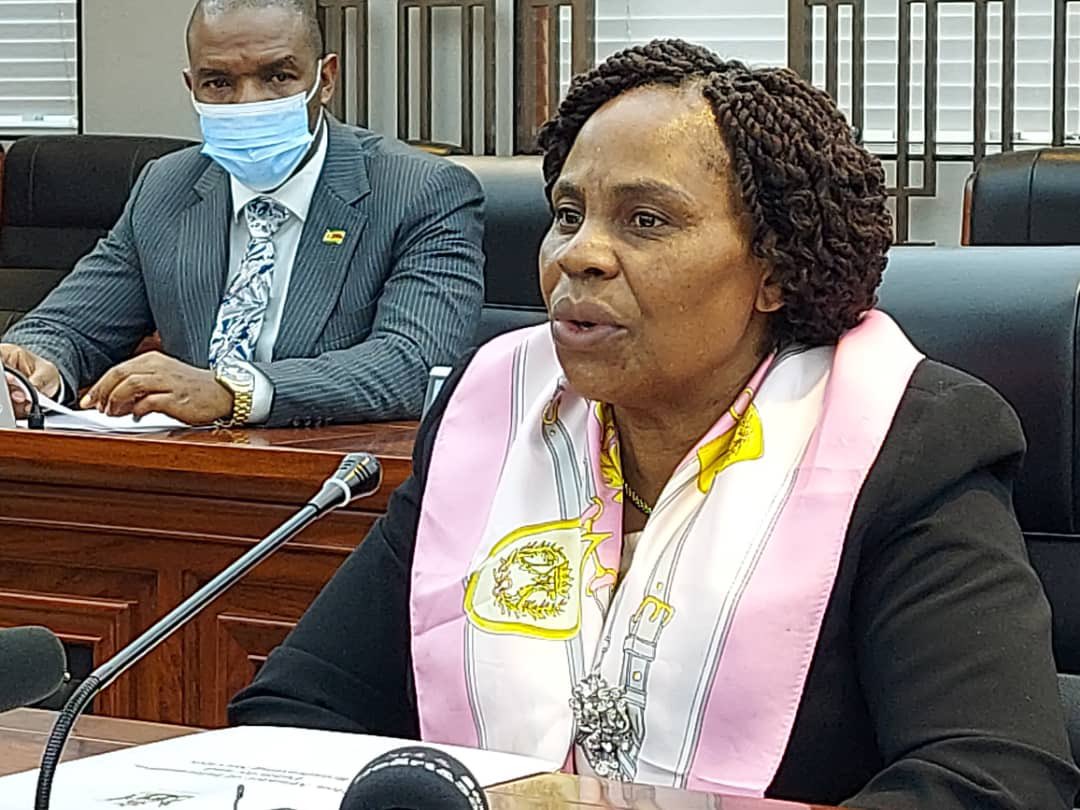 Cabinet considered Zimbabwe’s response to the COVID-19 pandemic, and the report on the procurement and roll-out of vaccines, as presented by the Vice President and Minister of Health and Child Care, Honourable C.G.D.N. Chiwenga.

Cabinet wishes to inform the nation that as at 25th April 2022, Zimbabwe’s cumulative COVID-19 positive cases had reached 247 598, with 241 460 recoveries and 5 468 deaths. The recovery rate was 98%, with 661 active cases recorded. The overall number of new cases decreased during the week, with 276 cases recorded, compared to 305 last week, reflecting a 9.5% decline. An average of 40 new cases were reported per day, compared to the 44 reported last week.

The country’s COVID-19 hospital bed occupancy rate also declined from 1.2% last week to 1.0%, with no Intensive Care Unit admissions countrywide. Cabinet notes the efforts to control the pandemic are being effective.

On the National COVID-19 Vaccination Programme, Cabinet is informing the nation that remarkable progress has been witnessed since the launch of the vaccination blitz a month ago, with over two million vaccine doses already administered.

The cumulative numbers of vaccinations since the outbreak of the pandemic in 2020 have now reached 5 831 785 and 3 640 013 for the first and second doses, respectively, and 580 135 for the third dose. Ministers of State for Provincial Affairs and Devolution are strengthening communication on the need for all eligible people, including religious leaders and their followers, to get vaccinated.

Strict enforcement of all COVID-19 regulations is continuing throughout the country. Emphasis has been placed around key activities such as the 2022 Population Census and the Zimbabwe International Trade Fair, which involve a lot of mobility.

The nation is further being informed that the Ministry of Primary and Secondary Education is currently preparing for the safe reopening of schools on 3 May, 2022 in full compliance with the Standard Operating Procedures for the Prevention and Management of COVID-19 as well as other Influenza-like illnesses.

Cabinet received proposals on the producer prices for maize, traditional grains, soyabean, and sunflower for the 2022 agricultural marketing season as presented by the Minister of Lands, Agriculture, Fisheries, Water and Rural Development.

Cabinet noted that in order to maintain farmer viability and profitability, there is need to review the prices for maize, traditional grains, soyabean and sunflower so that they are in sync with existing economic realities. A good price that promotes sustainable growth of a particular value chain is that which allows the farmer to realize at least a 15% profit margin.

The nation is being informed that CABINET approved as follows:

Cabinet received a report on the state of preparedness for the    2022/2023 production and summer season, as presented by the Minister of Lands, Agriculture, Fisheries, Water and Rural Development, Dr A. Masuka.

Cabinet wishes to inform the nation that, with a view to ensuring household and national food security, the update on preparations for the 2022/2023 summer agricultural season have been brought forward from August to April, in order to deal with the perennial challenges around food security in the country.

The COVID-19 pandemic, climate change, as well as geo-political conflicts have disrupted global supply chains for grain and agricultural inputs, with the resultant price escalations highlighting the need to intensify local production.

Accordingly, the main objective of the 2022/2023 summer programme is to sustainably increase crop and livestock production through implementation of, among others, the following critical strategies:

The Agricultural Finance Corporation has opened a special window to enhance production of potato and sunflower seeds. The consumption of traditional foods will be promoted as part of the Food Systems Transformation Strategy through sensitising the population, especially the youth, on the diverse and nutritive value of traditional grains that are naturally fortified and organically grown.

Grain dryers will be availed in order to assist farmers to expedite harvesting and marketing during the transition from Summer to Winter cropping. The Grain Marketing Board currently has 21 dryers stationed at various depots, up from the 7 in 2021.

In view of the need to mitigate the threat posed by dry spells at critical stages of crop development, Cabinet directed that Falcon Air, which is owned by the District Development Fund, be capacitated to conduct cloud seeding at appropriate times.

In the livestock sector, Cabinet wishes to inform the nation that the strategic objective is to sustainably increase livestock and fisheries production to satisfy and exceed national requirements for both human consumption and industrial use.

The Livestock Recovery and Growth Plan as well as the Fisheries and Aquatic Resources Development Plan will receive  funding from Treasury as well as  from the private sector. The plan will also involve genetics and access to forage and pasture, and reduction in disease-induced mortality.

Furthermore, local vaccine production will target a cumulative 15 million doses for livestock diseases such as Theileriosis, Anaplasmosis and Babesiosis. The Ministry will establish Farmer Field Schools run by Agritex Officers, covering both crop and livestock production in order to ensure that farmers maximise productivity through sound management of their crop and livestock inputs availed by Government.

The nation is informed that the Minister of Information Communication Technology, Postal and Courier Services, Honourable J. Muswere reported that as at day 50, progress on the Ministry’s identified projects is as follows : 36 of the targetted 200 ICT laboratories were established, and 392 schools and 5 tertiary institutions had been connected to the internet, against a target of 375 and 5 tertiary institutions, respectively. A total of 5 of the 10 targetted Public Finance Management System kiosks were commissioned, while establishment of the Kariba and Acturus Community Information Centres had reached 85%.

On the expansion and optimization of backbone network, construction of 10km fibre backhaul to each base station had been completed, while 2 080 of the 5 100 homes targetted under the Fibre to the Homes and Wireless to the Premises had been completed. Under the mobile network infrastructure roll-out and optimization programme, 106 Base stations had been scoped with a view to increasing network coverage and capacity. The roll-out of Smart Zimbabwe solutions is well on course across the sectors, with the training of Commission staff in progress.

Cabinet also advises that the Minister of Environment, Climate, Tourism and Hospitality Industry, Honourable N.M. Ndlovu, reported that all projects under the 1st 100-Day Cycle for 2022 were on course as follows : 56% of the targetted 66,27 hectares under the Rehabilitation of Degraded River Ecosystems had been completed; renovation of ZIMPARKS of 6 chalets and converting them into cottages was 30% complete, while materials had been procured, that is at Rhodes Nyanga Hotel and the five units at Lake Chivero.

Pertaining to the Forest Resources Mapping and Apiary establishment programme, production of a National Forest Cover Map was 85% complete, while identification of 10 sites for the establishment of 200 beehives had been completed as follows: Matabeleland provinces, 200; and Midlands and Manicaland, 100 each. Upgrading of the Meteorological stations was at 40% as at Day 50 of the Cycle. The World of Wonders Excellence Training programme reached 50%, with the goal being met within the current 100th day of the cycle.

The nation is further informed that the Minister of Transport and Infrastructural Development, Honourable F. Mhona reported that the North Wing of the Robert Mugabe Terminal Building stands at 61% completion. Under Phase 2 of the Beitbridge Border Post Upgrading and Modernisation Project, construction of the bus terminal, access roads and warehouses is on target. On the rehabilitation of road projects earmarked for the current cycle, progress was as follows: Harare-Marondera road dualisation on 6km, is at 45% completion.

5.0   PRINCIPLES OF THE TRAFFICKING IN PERSONS (AMENDMENT) BILL

Cabinet considered and approved the Principles of the Trafficking in Persons (Amendment) Bill as presented by the Minister of Home Affairs and Cultural Heritage, Honourable K. Kazembe.

In more detail, the Bill would provide for the following : establishing the criminal offence of trafficking in persons, in line with the Parlemo Protocol and the definition of the Bill will also include the definition of forced labour or service exploitation in relation to the crime of human trafficking, such as all forms of slavery or practice similar to slavery, sexual exploitation, prostitution, child and adult pornography, debt bondage, servitude, forced labour and services, child labour, unlawful removal of body organs, forced marriage, impregnation of female person against her will for the purpose of selling her child when the child is born.

The Bill will further provide for the strengthening of the Anti-Trafficking Inter-Ministerial Committee (ATIMC) by providing for the Committee’s liaison with appropriate Government agencies and other bodies in the investigation and presentation of traffickers, the protection and rehabilitation of victims and the prevention of trafficking in persons. The Bill will also provide for the establishment of a Secretariat to the Anti-Trafficking Inter Ministerial Committee and create an Anti-Trafficking in Persons Fund and determine the terms for its use.

Cabinet received an update report on the latest weather-induced calamities which affected some rural communities in Matabeleland North, Mashonaland West and Masvingo Provinces, as presented by the Minister of Local Government and Public Works, Honourable July Moyo.

Cabinet is informing the nation that as climate change increases the incidence of weather-induced calamities, violent hailstorms destroyed homes, schools and clinics as well as roads and bridges during the weekend of 23-24 April, 2022.

No injuries to persons have been reported, but the affected households lost grain, foodstuffs, blankets, clothing and other vital supplies. The affected areas included Nkayi in Matabeleland North Province, Gokwe North in Midlands Province, and Gutu in Masvingo Province.

The Ministry of Local Government and Public Works, through the Civil Protection Unit, immediately responded to the disaster, and delivered foodstuffs, blankets, clothing and other essential supplies to the affected households and Government Agencies. The situation is being continuously monitored in order to ensure appropriate levels of support to communities as they rebuild the infrastructure in their respective localities.