Source: The Difficult Life Of Zimbabwean Immigrants In South Africa 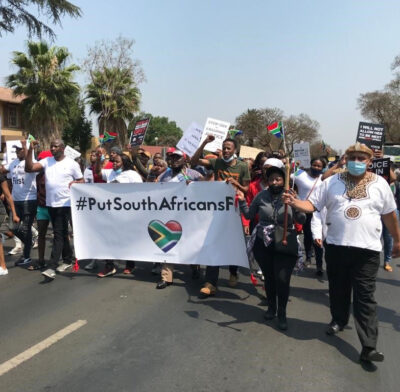 This week Operation Dudula announced its intention to camp outside schools in Gauteng to prevent undocumented foreign children and teachers from accessing education in the country.

The targeting brought to light the typical problems faced by foreigners in the country, particularly Zimbabweans.

Many Zimbabweans in South Africa are economic migrants who have left their country in search of better opportunities but often find themselves living in poverty and facing discrimination in the labor market.

The following is a list of the things the Zimbabwean diaspora in South Africa, especially the undocumented ones, have to deal with:

Zimbabweans, along with other African immigrants, have been targeted in violent attacks in South Africa in the past. In recent memory is the April 2022 brutal killing of Elvis Nyathi who was murdered simply for having attempted to flee from a vigilante mob.

Many Zimbabwean immigrants in South Africa are underemployed or unemployed and struggle to make a living. Those without legal documents are often exploited by employers who take advantage of their illegal status.

Those that managed to get some employment also live in fear of losing their jobs if authorities and vigilante groups like Operation Dudula push for the locals to be given the jobs instead.

In 2022 one of the actions of Operation Dudula was to move from company to company searching out foreigners and demanding that the employers terminate their contracts and offer the jobs to locals instead.

Zimbabwean immigrants in South Africa often face difficulties obtaining legal documentation, such as work permits, which can make it harder for them to find employment or access services.

Many are undocumented and may be hesitant to seek legal help for fear of being discovered and deported. Even those who do have documentation may struggle to navigate the legal system and understand their rights, due to language barriers and cultural differences.

Additionally, many Zimbabweans in South Africa may not have the financial resources to afford legal representation, which can make it difficult for them to assert their rights or seek justice in cases of discrimination or abuse.

This lack of access to legal support and protection can leave them vulnerable to exploitation and abuse, and can make it difficult for them to resolve disputes or seek remedies for wrongful treatment.

Zimbabwean immigrants in South Africa may face discrimination based on their nationality, which can make it more difficult for them to access services or find employment.

Zimbabwean immigrants in South Africa may face challenges in accessing basic services like healthcare, education and housing due to a lack of legal documents.

For those that eventually get permanent residence or citizenship, their ID cards are distinctly different from local South Africans making it easy for public service providers, employers, and potential clients to discriminate against them.

Many Zimbabwean immigrants in South Africa are separated from their families and communities, which can be emotionally difficult. Many therefore wish they could return home but find it hard to restart a life in Zimbabwe after spending a considerable amount of time in South Africa.

Another cause of stress for undocumented Zimbabweans is living in fear of arrest and deportation.

In addition, newly arrived Zimbabweans especially may face difficulty navigating the cultural and language differences between Zimbabwe and South Africa.

One serious issue is that of being targeted by criminals due to perceptions of being vulnerable.

Zimbabweans in South Africa may be seen as easy targets for crime because they are often living in poverty and may be unfamiliar with the area and its dangers.

Additionally, they may be reluctant to report crimes to the police due to fear of deportation or mistrust of the authorities. This can make them more susceptible to crimes such as theft, mugging, and extortion. It can also make them more vulnerable to human trafficking, as they may be lured by false promises of work and then forced into labor or prostitution.